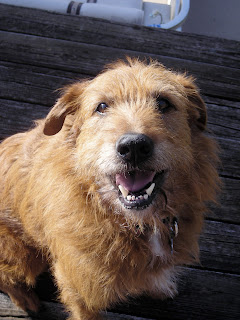 Mr. Cooper is one scruffy dog.
Let me just say that last night was a fine evening indeed.  Colin Hay was funny, engaging and humble.  His self deprecating sense of humor was delightful.  He told many whimsical stories in between his songs and dazzled us with his unique voice and brilliant songwriting.
Here’s a little snippet of last night’s show.  He was phenomenal, truly.  I was fortunate enough to meet him afterwards and he was a true gentleman.  I kept hugging him much to Johnny’s mortification.  I showed him my concert ticket from 1983 and he seemed genuinely tickled.  Then I asked him to marry me.  Turns out he’s married.  Turns out, so am I.  Oh well, the show was still kick-ass.
I awoke this morning to find that both of my eyes had somehow swelled shut.  I looked like Rocky Balboa.  I finally got the left one open enough to drive – that’s fun perspective-wise, let me tell you.  I went to the Minute Clinic and the Doctor took one look at me and said “I don’t know what’s happened to you, but I can’t fix it”.  She sent me across town to the Urgent Care facility.  The Doctor there prescribed a steroid pack and gave me some topical cream.  No one is sure what caused it and I must be nuts to post this picture but it makes me belly laugh each time I look at it.  I’m not sure why I decided to document it but it seemed like a good idea at the time. 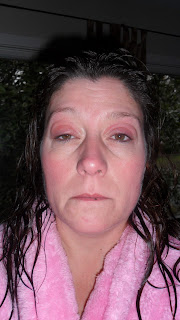 Isn’t that awesome?  What the hell is that black thing on my lip?  It’s just too damn funny NOT to share.  It doesn’t help that I had just gotten out of the shower.  When you’re me, you gotta check your ego at the door, folks.  Whew.
So, after vacuuming up my weight in dog hair, I took Mr. Cooper for a proper hair cut.  Not only does he look like he’s lost weight, his head looks to be too big for his body.  He loves his new ‘do though and has been prancing around like Pepe LePew in the back yard all afternoon. 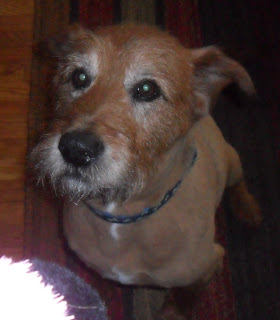 My name is Mr. Cooper and I have a large dome.
Normally you can’t even see his collar because his hair is so wiry and thick.  He looks a little “special”, but that’s okay…obviously, I DO TOO.